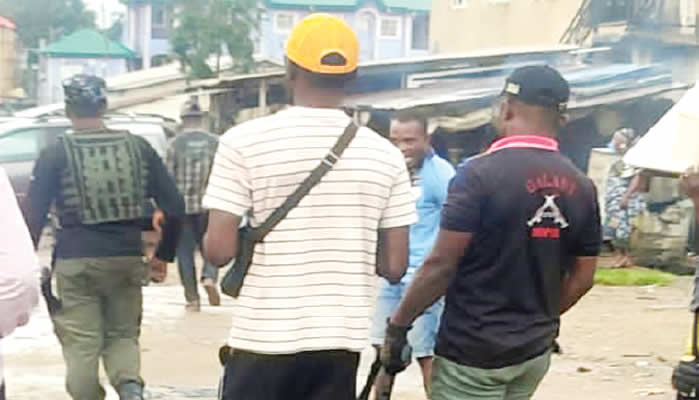 Residents of Orile Oko-Oba, in the Agege area of Lagos State, have decried the use of armed policemen by a power firm, Ikeja Electric, to enforce payment of electricity bills.

However, the firm said the cops were for the protection of its staff, who had been previously allegedly attacked in the community.

PUNCH Metro had reported that two of the residents were arraigned for reportedly beating an official of the firm.

After the incident, our correspondent gathered that officials of the electricity company, alongside armed policemen, went to Augusto Avenue, a street in the community, on October 13.

Pictures and videos seen by our correspondent showed the workers and policemen in the community, as youths gathered to resist them.

An executive member of the community, Odewale Amao, said people were terrified by the presence of the armed officers.

He said, “I was called that Ikeja Electric officials brought police officers with them. When we went there, the officials alleged that they brought the police because they thought the residents would attack them. Not long after, another team of armed policemen arrived.

“We told them that we could not give them money if they wanted to use the police to harass us. Then they started disconnecting electricity. We don’t understand why they are oppressing us as if we are in a military regime.”

A cleric, Adegbenro Ibrahim, said houses that had suffered power disconnection were still forced to pay.

He said, “They sent my bill 30 minutes before they arrived and gave me N43,633 for only my apartment in a building of two apartments, meaning almost N90,000 for one house. This is what every house is facing in this community.

“They sent about N30,000 to one house. When we checked the ‘Jump Form’ that shows electricity calculation, we saw that the house should get only N18,000. They have disconnected some houses, but are still bringing bills to those houses. Some officials are saying the company wants to use the money they’ll get from us to pursue their case against us in court.”

A civil servant, Olabode Oladeyi, said, “I came out when I heard people shouting outside. I saw armed men chasing our residents. It was a frightening sight. We didn’t fight with them. We were only shouting that they should not bring guns to harass us because they want to collect money.”

A lawyer, Toyin Taiwo-Ojo, said it was disturbing that the police had become money-recovery agents.

She said, “If the company has consumers that have not paid their bills, there are two options. One, they can disconnect their power supply. Two, they can approach the court and get a judgement in order to collect the payment for electricity usage.”

The Head of Corporate Communications, Ikeja Electric, Felix Ofulue, said the policemen were for security reasons.

“We can’t bill them N1 or N2. If they don’t want estimated bills, they can buy meters. This happens everywhere. If they have an issue, they should go to the office and engage them.”