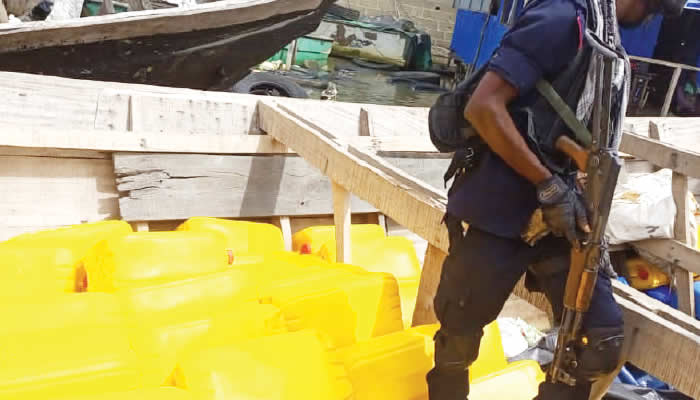 The command also confirmed that it recovered 24,500 litres of petrol from the suspects’ base during the arrest.

Our correspondent learnt that the command was tipped off about the operations of the vandals on the high sea before the arrest was made.

The two suspects, Olorunwa Sunday and Friday Bolaji, alongside the exhibits, were paraded by the Commandant of the corps, Eweka Okoro, on Tuesday, at the Ijora Jetty in Lagos.

Okoro said the command’s intelligence team had been on the trail of the oil vandals for a while.

He said, “We arrested a Cotonou boat containing 400 kegs of 30 litres of PMS and 50 kegs of 250 litres of the same content. We discovered that the petrol was being smuggled from Nigeria to the Republic of Benin to be sold at the triple price.

“According to investigations, the destination of the suspects was Badagry and then to Cotonou to sell the petrol.”

He said the suspects would be charged to court to face the law upon the conclusion of investigations.

“The petrol will be given back to the NNPC and we will forward the findings of our investigations for prosecution,” he added.