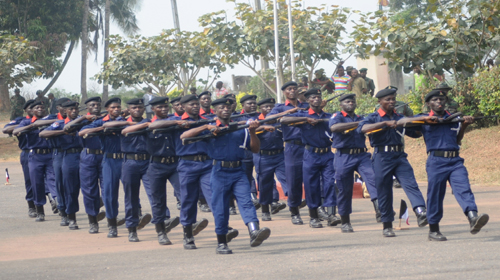 The Ondo State Command of the Nigeria Security and Civil Defence Corps has arrested eight persons who allegedly involved in illegal dealings in petroleum products.

The suspects, according to the Corps, were arrested in different locations across the state.

Parading the suspects at the command of the Corps in Akure, the state capital on Tuesday, the NSCDC State Commandant, Mrs Olatundun Olayinka,
explained that a Mack peddler truck with registration number Lagos MUS 149 XA with about 15,000 litres of suspected adulterated diesel was arrested at the Benin-Lagos Expressway in Ondo State with two suspects.

Olayinka explained that the Corps in its renewed vigour to eradicate the menace of illegal dealings in petroleum products in the country made tactical moves by deploying the Commandant General’s Intelligence Squad who intercepted the suspects at different locations in the state with products suspected to be adulterated diesel.

He said, “One Kelvin Idahosa and Oreyie Osahon were arrested at Ajebamidele, Lagos-Ore Expressway, Ondo State with a Mack truck with registration number Edo SGD 60XL with about 50,000 litres of suspected adulterated diesel. Also Piri Sola, male, aged 50 and three others were arrested at Ofosu, Edo State with 45,000 litres of suspected adulterated diesel.”

The commandant said the arrests of the suspects were in response to the directive of the Commandant-General to rid the country of all economic saboteurs and to protect all national critical assets and infrastructure.

“These economic saboteurs will be charged to a court of competent jurisdiction after the completion of our investigation.

“I am using this medium to once again reiterate our commitment as an organisation saddled with the protection of national critical assets and infrastructure to the fight against oil theft and vandalisation of our collective assets by a few disgruntled elements.

“The command under my watch will be all out to fight criminal elements to a standstill. They either desist from these acts or relocate from Ondo State,” he said.