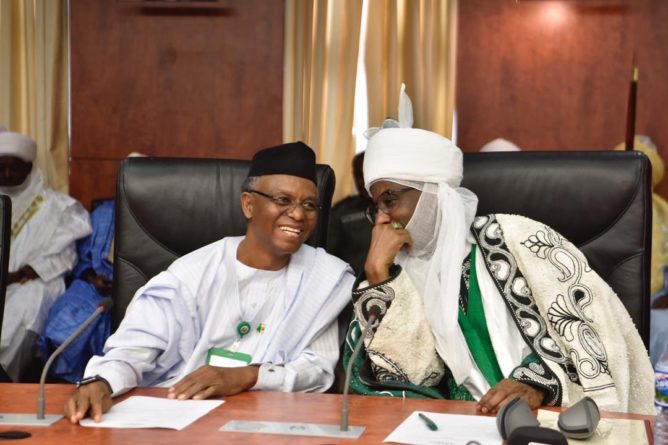 The Independent Petroleum Marketers Association of Nigeria has called on the former Emir of Kano, Alhaji Muhammad Sanusi II, and the Kaduna State Governor, Mallam Nasiru El-Rufai, to stop making unguarded comments on the oil and gas sector, saying with the current economic situation in the country, removal of fuel subsidy will cause more hardship for Nigerians especially the common man.

The IPMAN Chairman, Northern chapter, Alhaji Bashir Danmalam, made the remark while addressing newsmen in Kano on Tuesday.

According to Danmalam, the former Central Bank Governor and El-Rufai had for long been talking about the removal of subsidy at every forum they found themselves.

“What happened after the subsidy of gas (diesel) was withdrawn. The price of anything you can think of has gone up as a litre of diesel is now being sold at N850,” IPMAN chairman said.

Danmalam was reacting to Sanusi’s comments at the seventh edition of the Kaduna Economic and Investment Summit where he was full of pity for the incoming President on account of the scale of the economic challenges awaiting him, particularly the knotty issue of petroleum subsidy and debt servicing.

“The reform of the oil sector has already started by the passing of the Petroleum Industry Act by Mr President, with a 24-month transition period.

“The management of the NNPC must be commended for their consistency in seeing the PIA was passed and implemented to the letter,” he said.

Danmalam further said, “Today halfway through the transition period, the NNPC has completed its transition and is now a full fledged limited liability company with strategic commanding shares in the nearly completed Dangote refinery, the largest refining in the world.

“It means that as Nigeria exits fuel subsidy, the management of the NNPC has invested wisely in local refining capacity to boost domestic consumption, eliminate importation, ease the pressure on our forex, straighten the Naira, provide jobs and boost our GDP. Mele Kyari and his team deserve commendation for their doggedness, patriotism and nationalism.

“However, the issue of removing fuel subsidies has to be gradual in order to make it effective and result-oriented for national economic growth and development.”

He noted that the governors and their states have always been fed mainly by the hard work and earnings of the NNPC over the years, adding now that the NNPC has moved on, “let’s see how the states fare”.

On the volume of petrol being consumed in Nigeria on a daily basis, Danmalam advised the former Emir and Governor El-Rufai to visit all the depots where the product is being kept before distribution to ascertain whether it is being imported or not.

He said there was a time the association wrote to the President, Major General Muhammadu Buhari (retd.), calling on his government to constitute a committee including the National Bureau of Statistics and all the relevant stakeholders to investigate the volume of fuel being imported and consumed on a daily basis which had yet to be done.

Danmalam said if the former emir and Governor El-Rufai were smart, they would have helped Kaduna State to be independent of FAAC allocation like what Tinubu and his successors did by making Lagos to survive even without FAAC allocation, but they did not.

“The concern of the duo is to see that the Federal Government removed subsidies so as to make life more difficult for the less privileged citizens of the country.

“It’s high time for the former Emir to stop bringing his capitalist ideologies into the country in order to maintain his dignity,” he said.

He, therefore, advised the duo to concentrate on what would be of benefit to the citizens rather than continue to talk on issues that are anti masses.