The crisis rocking the Peoples Democratic Party worsened on Tuesday with the Edo State chapter of the party rejecting the campaign council list in the state.

The Edo State chapter of the PDP said it was rejecting the list because the proposed visit of its presidential candidate, Atiku Abubakar, “is shrouded in secrecy.”

The statement rejecting the campaign council list was signed by the State Deputy chairman, Harrison Omagbon, and Secretary, Hillary Otsu, PDP chairmen in the 18 Local Government Areas and 11 members of its State Working Committee.

The statement read, “Our attention has been drawn to a Vanguard Newspaper publication of October 17, 2022, on pages 14 and 16.

“We, the undersigned members of the State working Committee and Local Government chapter chairmen hereby wish to inform all Edo PDP members and supporters that:

“We reject the Edo State Campaign Council list as published in the Vanguard Newspaper. The constitution of the purported campaign council list was never discussed by any of the party organs in the state before the publication.

“The proposed visit of the party presidential candidate is shrouded in secrecy in Edo government circles.

“We urge all party members in the state to disregard the said publication and intensify all efforts in grassroots mobilisation to ensure victory for our candidates in the forthcoming elections.” 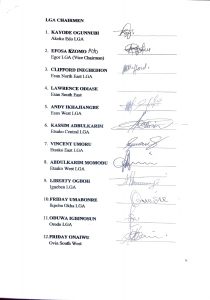 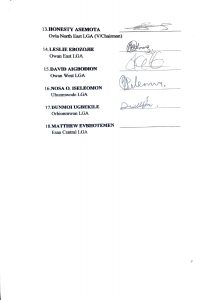 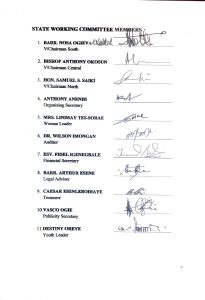