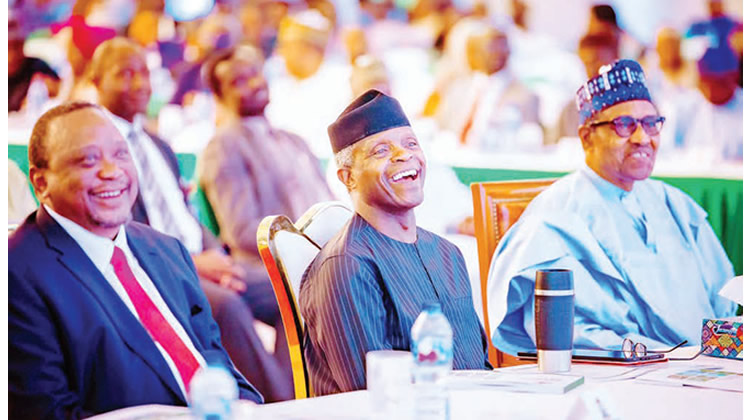 The President, Major General Muhammadu Buhari (retd.), has said that going by the lineup of completed and ongoing infrastructure projects executed in the past seven years, his regime has met the yearnings and aspirations of Nigerians.

The president said this in a statement by his Special Adviser on Media and Publicity, Femi Adesina, titled ‘With high-impact projects across Nigeria, we have met the yearning of Nigerians, President Buhari declares at the last ministerial retreat.’

Themed, “Enhance security, fight corruption, transform the economy”, the retreat is meant to review the regime’s progress since the last edition exactly one year ago.

According to him, the establishment of a national carrier for Nigeria is at 91 per cent completion and is expected to commence flight operations before the end of 2021.

He said the process was being fast-tracked by the certification of Lagos and Abuja international airports by the International Civil Aviation Organisation, while Kano and Port Harcourt Airports are undergoing similar certification processes.

Giving specifics of the economic milestones of his regime, Buhari revealed that Nigeria witnessed seven consecutive quarters of growth, after negative growth rates recorded in the second and third Quarters of 2020.

He also warned that imports eligible for foreign exchange must tally with the country’s fiscal ambitions in terms of manufacturing.

“The failure of that synergy has led to unnecessary drawbacks in our economic performance and planning. What imports are eligible for foreign exchange must agree with the fiscal ambitions for manufacturing and industry,” Osinbajo said at the third Ministerial Performance Review of the Buhari-led government retreat held at the State House, Abuja.

This is according to a statement signed by his Senior Special Assistant on Media and Publicity, Laolu Akande, titled ‘Osinbajo at FG’s Ministerial Retreat: what we must do to manage foreign exchange rate better.’

In his presentation titled, “The Buhari Administration: Reflections on the Journey So far,” the VP who detailed the achievements of the Federal Government in the past seven years said there were some areas of concern in the economy.

“The first is the synergy between fiscal and monetary policy. The failure of that synergy has led to unnecessary drawbacks in our economic performance and planning. What imports are eligible for foreign exchange must agree with the fiscal ambitions for manufacturing and industry,” he pointed out.

Furthermore, the VP said “Our exchange rate management continues to be an issue.  The exchange rate of the naira to convertible currencies continues to face significant downward pressure because demand substantially outstrips supply.

“That is just the reality. On one hand, we have tried demand management and rationing, which has not really worked because fixing the price while the parallel market reveals a massive arbitrage merely creates the opportunity for massive rents.

“It will also compound the backlog of remittances for foreign businesses who want to repatriate their earnings.  The discussion that we must now have and going forward is how best to manage the situation by finding a mechanism for increasing supply and moderating demand which will be transparent and will boost confidence.”

Therefore, he proposed a more market driven approach saying, “some price discovery within the context of a managed float is certainly required.”

“While they may not have been perfect it would appear as if the rules were clear and there was relative stability.  When people know how they can access foreign exchange competitively, this will boost confidence and inward flows will increase,” he added.

Highlighting what he called the “game changing achievements” of the Buhari regime that the VP listed the development of infrastructure alongside “the creativity” of the FG “have introduced to infrastructure financing.”