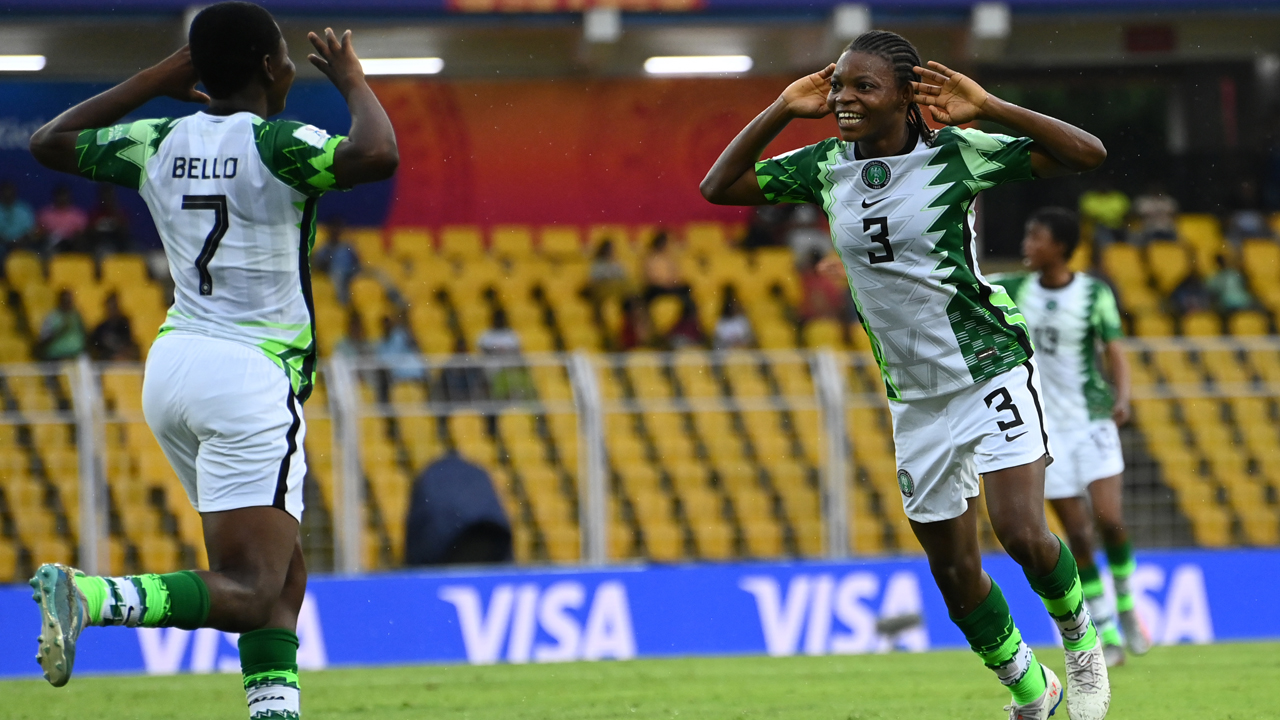 Nigeria’s U-17 Women’s football team on Monday defeated Chile 2-1 in the third match of Group B at the Kalinga Stadium to book their place in the quarter-finals of the ongoing U-17 Women’s World Cup finals in India.

Stand-in captain Blessing Emmanuel scored an early goal for Flamingos in the fourth minute, following an assist from Opeyemi Ajakaiye to give Nigeria the lead.

Bisola Mosaku added the second in the 82nd minute to guarantee Nigeria a place in the last eight despite Rovemer Tali converting a late penalty for Chile.

The win earned the Flamingoes a place in the quarter-finals, with a date against the United States on Friday.

PUNCH Sports Extra takes a look at some of the other talking points of the game.

As was the case against Germany and New Zealand in their first two games, coach Bankole Olowookere and his girls carved a niche for themselves at the ongoing tournament in India with their trademark salute celebration.

At every goal scored, the girls would rush to the technical crew’s corner to salute the coach and his assistants, to the delight of spectators at the two stadiums they played in. The celebration has become so loved and one of the commentators during the game said, “Aye, yes. Salute to the boss.”

The 2-1 scoreline against the North Americans didn’t paint the true picture of the Flamingos shooting prowess, thanks to the heroics of the Red Ones goalkeeper, Catalina Alvarado, who made a series of saves to keep the scoreline minimal.

The Flamingos had a total of 27 shots, with 13 of them on target, but managed to convert only two of them.

The Flamingos had local support on Monday, with Nigerians living in Bhubaneswar coming out to cheer the young ladies to victory against Chile.

The crowd was treated to popular Nigerian track ‘Buga’ by Kizz Daniel, which was played for the Nigerian girls when they scored.

The game on Monday was important match for both teams, Nigeria needed at least a draw to advance to the quarter-finals, while Chile needed a win.

But the Nigerians put up an impressive outing to claim all three points. Despite taking a two-goal lead into the last 10 minutes of the encounter, coach Bankole Olowookere was unrelenting and continued to dish out instructions and screamed from the touchline every minute to keep his girls focused.

The Nigerian girls were very vocal all through the entire 90 minutes of the game, communicating in the languages best understood by them, with Pidgin English and Yoruba taking centre stage.

The North Americans were equally very loud on the pitch of play, making use of their official language, Spanish.